The House of Castello is iconic for their Danish Blue cheese that has been leading the industry since 1893 when their first cheese was made. Only 110 years later, Castello is sold in over 50 countries.

It is Castello’s tradition of skillful production that and high standards that gives consumers a reason to keep coming back. By focusing on the quality of the cheese, Castello was able to achieve culinary glory when picked the nation’s best tasting imported Blue cheese. After establishing itself in the industry, Castello wanted to reach its consumers in a new way by offering them value through a social media strategy.

Castello Cheese USA teamed up with Anna Crowe to launch the “Blue Meets Grill” sweepstakes partnered with Facebook advertisements. Castello gave one lucky winner a new Char-Broil grill and Omaha steaks! Yum! Inspired by the idea of backyard grilling and family time, we were able to build a campaign that connected with Castello’s following on a more personable, humanistic level.

Facebook fans were flocking to Castello’s page and sharing their excitement for the a chance to win. By utilizing our listening strategy we were able to track mentions and shares that then allowed us to retarget and redesign our Facebook ads to hit a more engaging audience that would not only Like and enter Castello’s contest, but remain a loyal fan and consistent participant on their Facebook page.

With the success of the campaign, Castello decided to run the contest one month longer than originally planned. Once the winner was announced, Castello saw in influx f new fans as the winner was so thrilled about receiving the grand prize that he boasted about the contest on multiple social networks which allowed for an increased potential reach and increased brand reputation.

With 1,860 entries, Castello was able to achieve 6,535 new Facebook Fans. This made the largest contest that Castello had run to date. 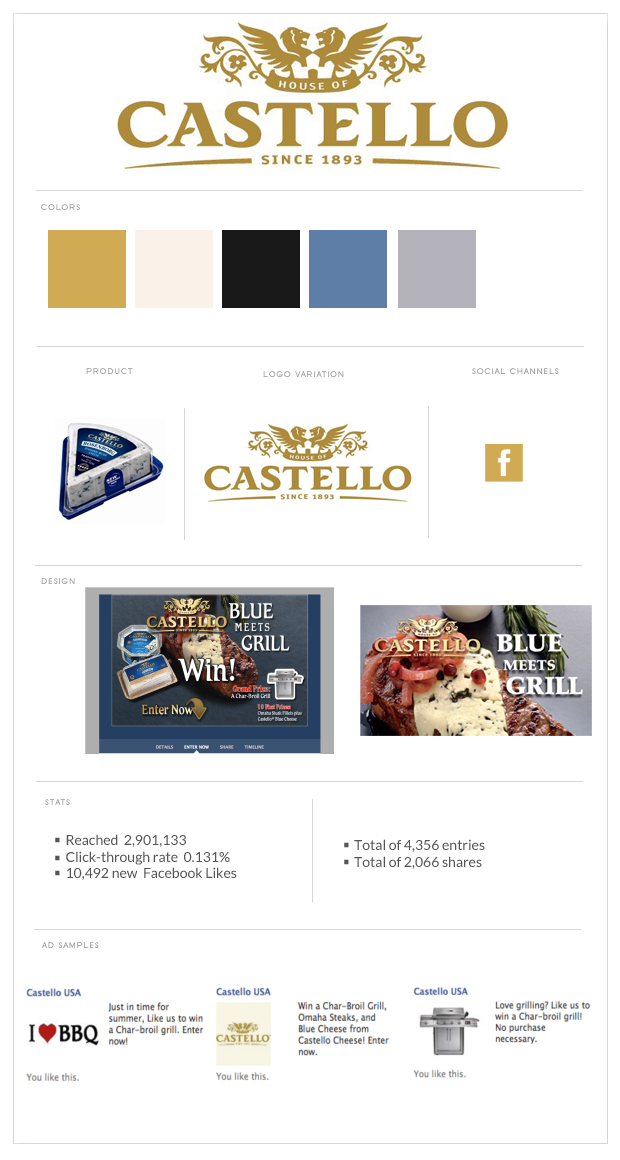